MindofModernMan  Sure, we talk about style, tools, sports and kids here, but quite often we bring up some fun Pop Culture stuff.

A few weeks ago, the holy grail of pop culture happened – Disney released the Teaser Trailer for the FINAL movie in the Skywalker Saga at the Star Wars Celebration in Chicago. We have now seen (many many times) the trailer for Star Wars The Rise of Skywalker.

SO, we did a reaction video of watching the trailer. Jon and I recorded our feelings after seeing it a few times. The reaction may be a few weeks old, but dang if they aren’t real!

So, what did we have to say? Here are the highlights, then head over and listen to the whole podcast on iTunes or by clicking the player just above here.

Rey’s breathing opens it up. This mirrors her breathing in The Last Jedi and Finn’s in the teaser trailer for The Force Awakens. But this time – she’s got it under control. She’s focused. She’s almost zen-like…. Jedi-like.

Luke hits the heavy narration and drops the line “We’ve passed on all we know…” The camera pans down and see Rey is once again in possession of a FIXED lightsaber. The one that belonged to Luke before Rey, and Anakin before Luke. Yeah, it’s the one Obi Wan gave Luke in A New Hope.

“A 1000 generations live in you now…” Sound familiar? Obi Wan told us about those generations in that same scene in A New Hope… “For over 1,000 generations, the Jedi Knights were the guardians of peace and justice…” It seems quite apparent that Rey is truly a Jedi now.

While we focus on Luke’s lightsaber, notice what else Rey still has? Yeah, that’s the blaster given to her by Han Solo. Both of the heroes from our childhood are here with Rey in this moment.

The screen goes black and we’re told “Every Generation Has A Legend”. Look familiar? We learned this when Anakin was a little kid too in The Phantom Menace.

We get a swell of John Williams amazing music – a nod to Leia’s Theme from the original trilogy.

And a ship (seemingly random in shape) heads towards a city or planet we’re not familiar with. Or, have we seen this ship before?

Jon found a great article on ComingSoon.net that points out this ship is VERY similar to the one Rey watched fly away from Jakku back in The Force Awakens. Seems this ISN’T just a random ship in the new trailer…

Kylo is going nuts in a fight and somewhere, someone, is rebuilding Kylo’s smashed mask. A ‘fix’ to what happened in The Last Jedi?

We finally see Poe and Finn – looking very Butch Cassidy and Sundance. Bromance has been rekindled? 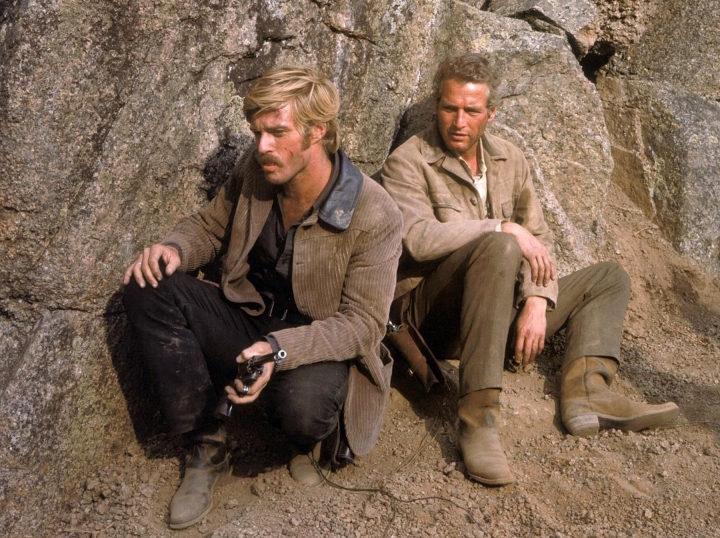 And BB-8 has a new little friend too. Remember when he was the cute new face? Then we had the porgs and now we meet D-O.

Into the cockpit of the Millenium Falcon, Chewie is there in his co-pilot seat and back at the helm – Lando! Jon noticed that his shirt is VERY similar the one we saw in Solo.

For Keith, it really reminds him of a Gordon Gartrell original on The Cosby Show!

Again, we have a black screen and we’re told that The Saga Comes To An End. Remember in The Phantom Menace when we were told it was just beginning?

We have sand skiffs, C3PO looking upset and storm troopers looking like Harry Potter and crew playing quidditch. We have hands (most likely Leia) with a medal from A New Hope. Maybe Chewbacca gets his finally?

As Leia hugs Rey, we hear Luke narrate “We’ll always be with you.”

Finally we get our shot of the gang all together.

Check out Rey’s outfit. Nothing is done in Star Wars in a random way, so let’s take a look. She’s in stark white and has a sizable arm band. Anyone else reminded of Padme in Attack of the Clones?

And while we’re talking about her white outfit, let’s look at the history of Rey’s outfits across the three movies.

In The Force Awakens she is in light gray, unsure what she’s going to be. In The Last Jedi she’s in DARK grey – being pulled to the Dark Side in a strong way. Now she’s here, with 1000 generations of Jedi with her… she’s strong, she’s bright, she IS the LIGHT!

The band comes to the sea and we see an all too familiar site – the ruins of the Death Star!

Luke finishes his narration with “No one’s ever really gone.” And that’s when every jaw slammed into the floor… The Emperor’s cackle!

Not sure it was him? On the live stream of the Star Wars Celebration they followed the trailer with an appearance of the man himself – Ian McDiarmid telling the crew at Celebration to, in his best Emperor voice… “ROLL IT AGAIN”!

PHEW! That was an action packed 2-minutes and this didn’t even cover ALL we talked about.

So, again…. watch our video as we watch the trailer and listen to our podcast as we really pull it apart to discuss.

Then, head to the comments and share YOUR thoughts on all this.